Tragedy struck the Village of Kettle Valley in 2003, just as the community was experiencing a rapid pace of growth, welcoming new neighbours to our idyllic neighbourhoods. The Okanagan Mountain Park Fire lives in the memories of people throughout the valley and across the country, including many of our own residents.

In August of 2003, the Central Okanagan was experiencing one of its driest summers in a decade. On August 16, a lightning strike sparked a wildfire near Rattlesnake Island, located along the eastern shores of Okanagan Lake, across from Peachland. The dry conditions and strong winds made it possible for the flames to quickly spread into Okanagan Mountain Provincial Park and the wildfire became a firestorm within days. 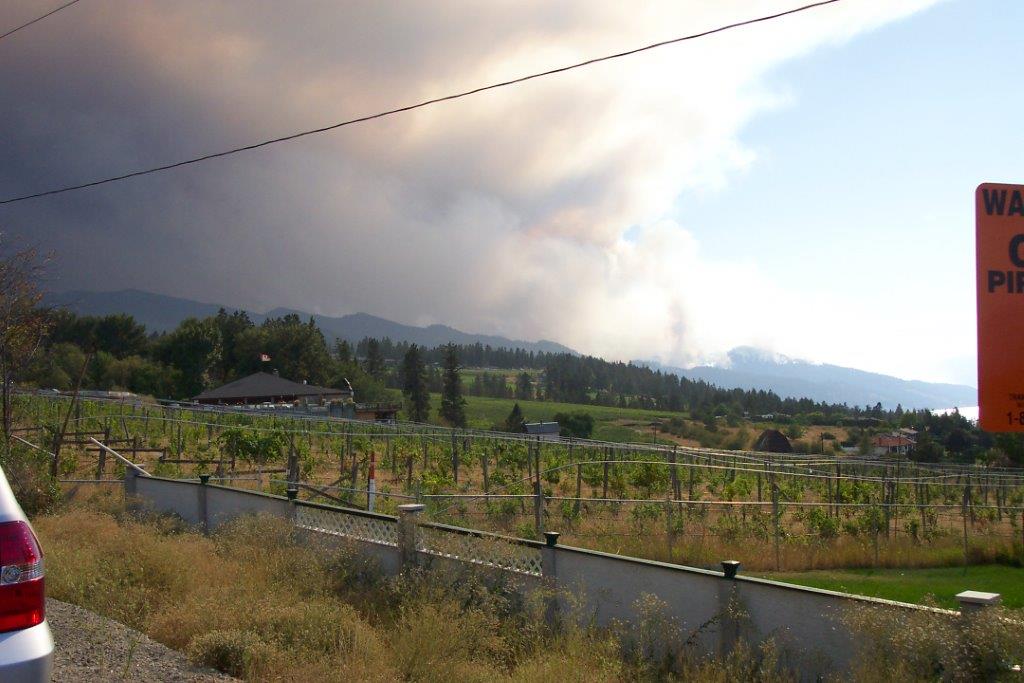 Picture taken from Chute Lake Road beside Summerhill Winery, Kettle Valley was not yet evacuated but this photo shows how the fire was coming up from Okanagan Mountain Park.

Located on the northern slopes of Okanagan Mountain, in Kelowna’s Upper Mission area, Kettle Valley is just a few kilometres from Okanagan Mountain Park. Residents watched news coverage of the fire with concern as the flames continued to spread closer and closer to our community.

On August 19, three days after the fire began, the President of Kettle Valley issued a memo to all residents. While we were hopeful that the fire would be under control soon, the Village of Kettle Valley took several precautionary measures, as detailed in the memo:

The memo also asked residents to prepare their garden hoses, be cautious with cigarettes, and to create a plan for notification in the event of an evacuation. 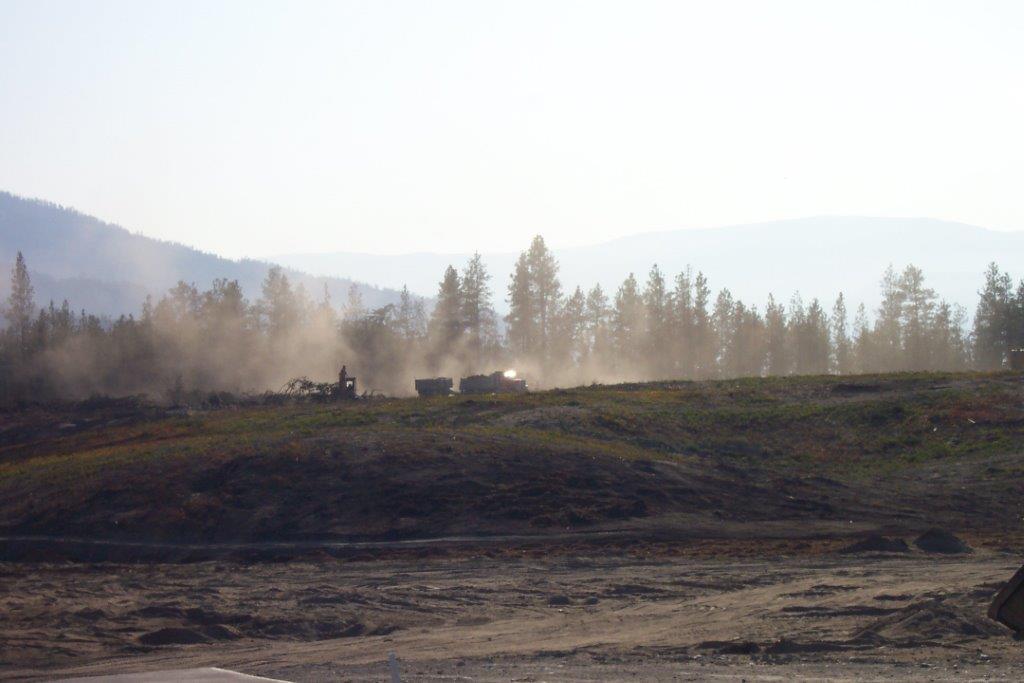 At the time of the fire, we were clear cutting for our upcoming neighborhood called 'The Providence' and it helped guard against the fire in a big way.  The homes that were destroyed in Kettle Valley were caused by fireballs and not the actual fire coming through.

Just a few days later, the evacuations began and 27,000 people were forced to flee their homes, including the entire community of Kettle Valley. At the time, it was the largest non-wartime civil evacuation in our country’s history.

In total, the firestorm consumed 25,000 hectares of forest and parkland and took 239 homes - including five homes in the Village of Kettle Valley. No lives were lost and considering the incredible breadth of the fire and it’s often unpredictable nature, the destruction could have been much worse. 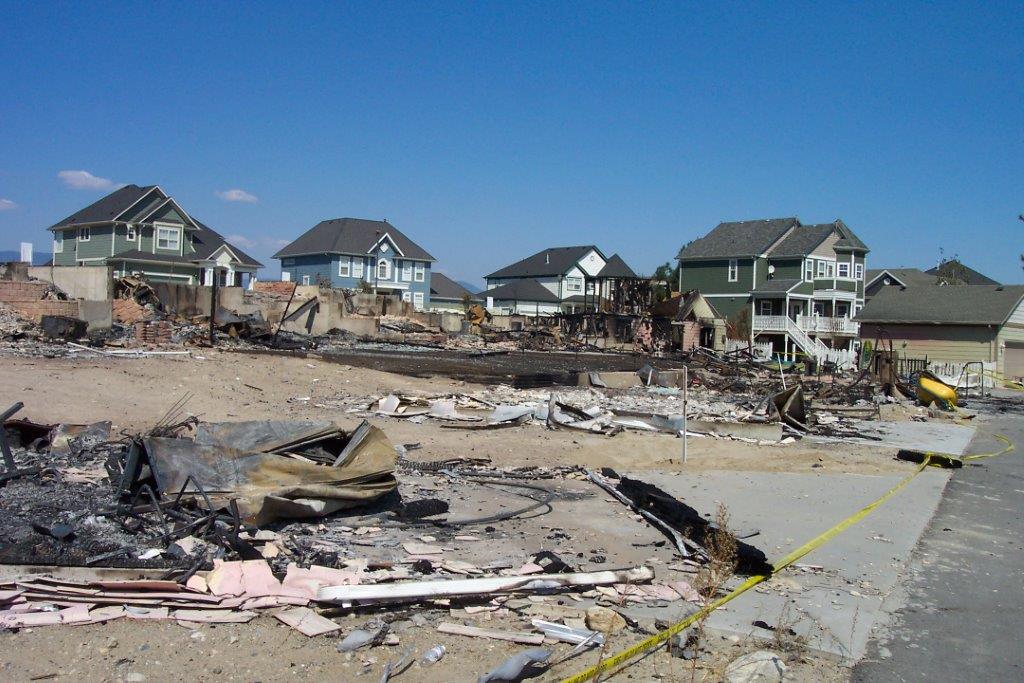 Five homes were lost in the Village of Kettle Valley as a result of the 2003 Okanagan Mountain Park Fire.

At the end of August, residents were allowed to return to their homes and Graham Wood, then President of the Village of Kettle Valley, issued a Welcome Home memo to residents, tenants, and builders. The memo detailed our ambitious plan to return our community to as near-normal as possible within 30 days so that families could feel at home once again and recapture the sense of community within the development.

We worked with local stakeholders and the City of Kelowna to help clean up the neighbourhood as quickly as possible, including removing the remnants of the handful of destroyed homes so that our homeowners could begin rebuilding on a clean slate. This also minimized the number of drive-by “lookiloos” on our streets.

Kettle Valley Junction was a spectacular 18,000 sq. ft playground that was built with the assistance of some 800 volunteers. Local kids dubbed it the ‘Castle Playground’, thanks to it’s spectacular wood form and turrets. At the time, it was one of the largest playgrounds in western Canada, but as an all-wood structure, it was quickly consumed by the flames and was completely destroyed in the 2003 firestorm on August 22.

The original Kettle Valley playstructure was an impressive all-wood haven for Okanagan children. 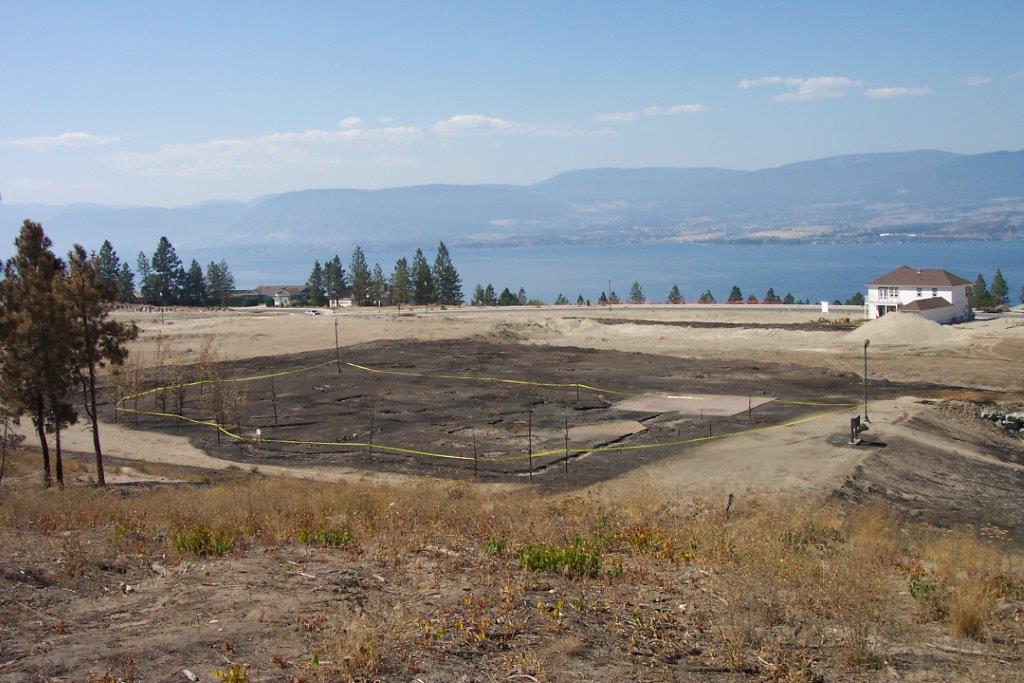 Residents pulled together to form the Kettle Valley Play Structure Reconstruction Project. The group raised funds for the reconstruction of the playground and in 2004 a new play structure was erected in Quilchena Park, along with a splash park.

Quilchena Park is also home to a trio of monuments that share the story of the 2003 Okanagan Mountain Park Fire, including a plaque that recognizes the hard work and dedication of the many fire departments that helped fight the firestorm. More than 60 fire departments from across B.C. came to Kelowna to help battle the blaze along with over 1,000 forestry firefighters, loggers, and contractors, as well as a team of 1,400 members of the Canadian Armed Forces. 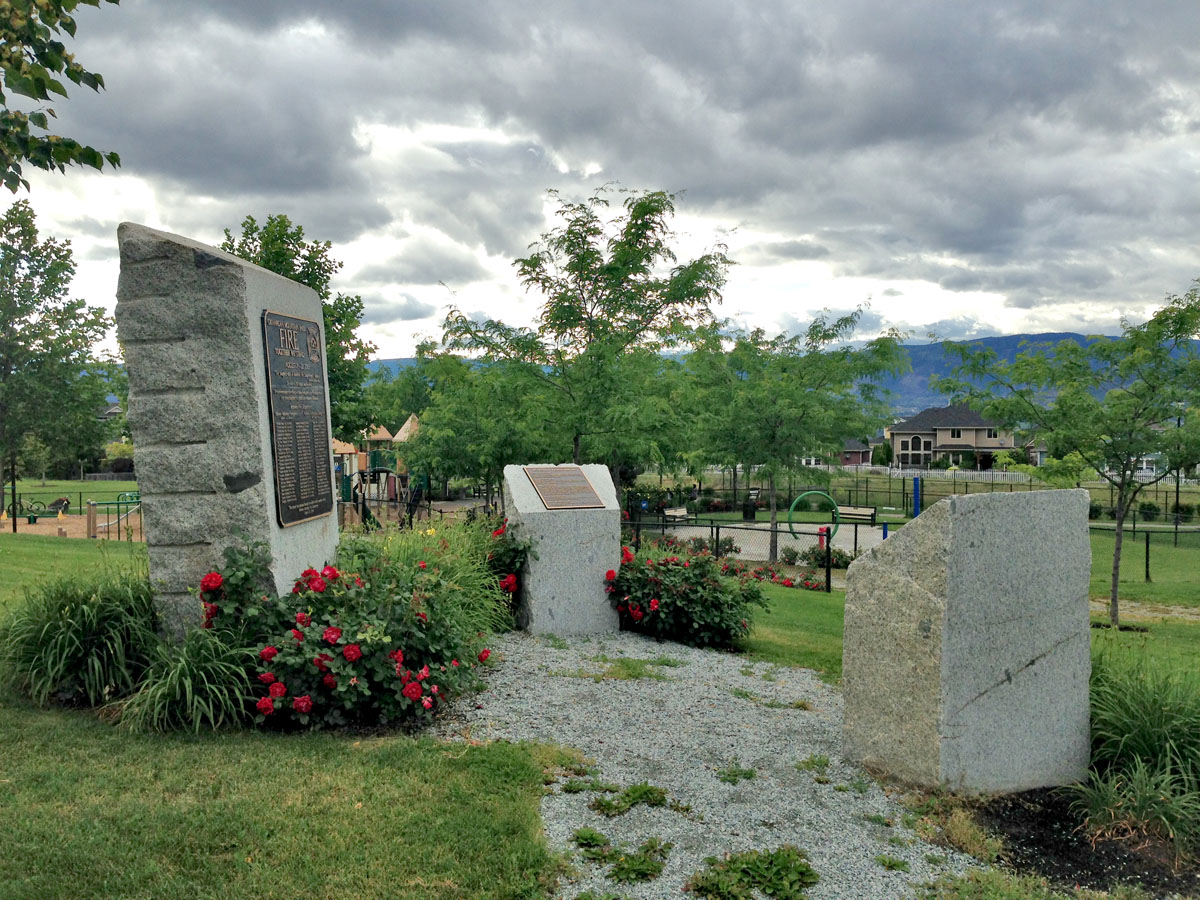 Our local firefighters and emergency personnel fought hard to protect our homes and our city. When they arrived at a church auditorium to deliver the news that some homes had been lost, they received a standing ovation. Even then, anxious with fear that their address would be named as one of the homes lost, homeowners recognized that these men and women were fighting their hardest and were grateful for their sacrifices. 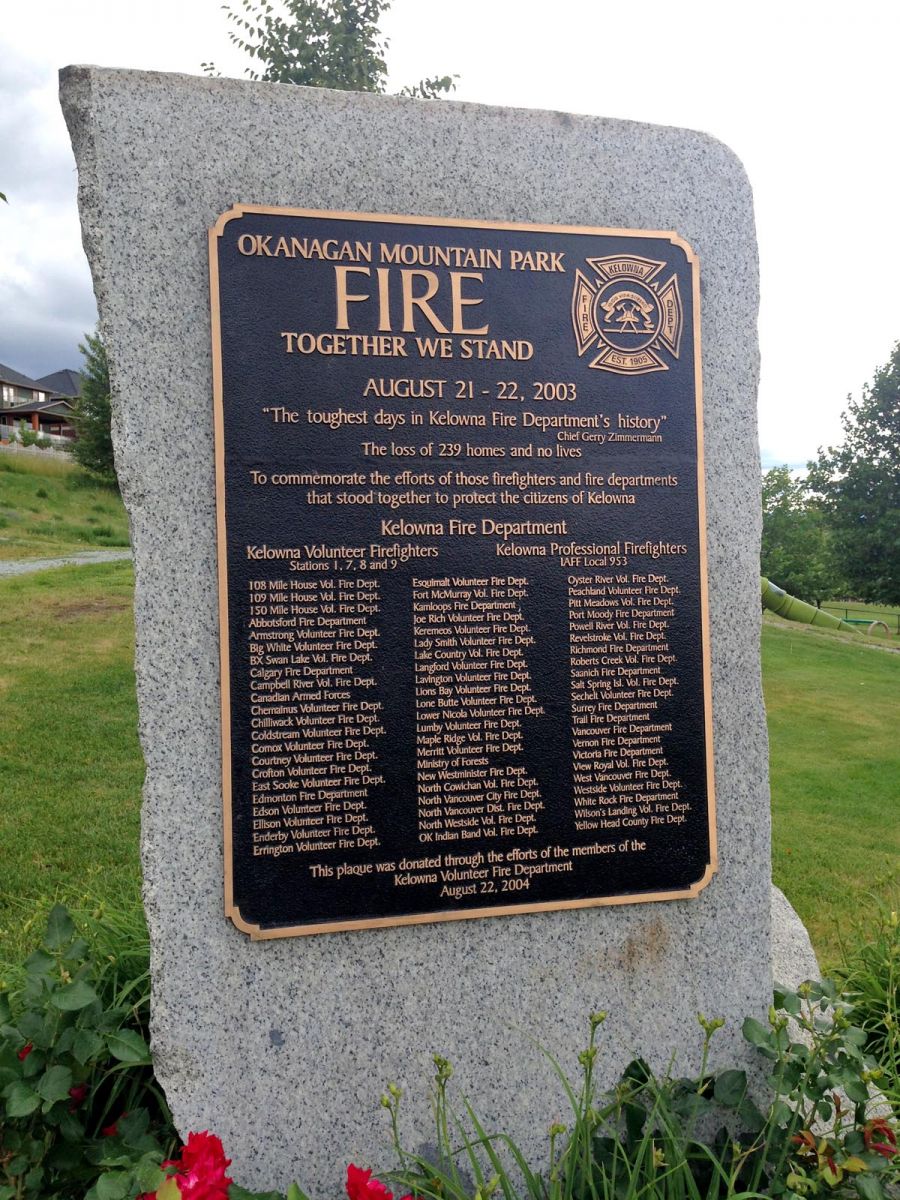 Nearly 13 years after that terrifying month, charred trees on the hillside are the only physical remnant of the devastation caused by the 2003 Okanagan Mountain Park Firestorm. However, the sense of community that was galvanized as residents leaned on one another and shared in the heartache of their neighbours remains strong. This sense of community and family that permeates every street and every home is what makes the Village of Kettle Valley a truly special place to call “home”.